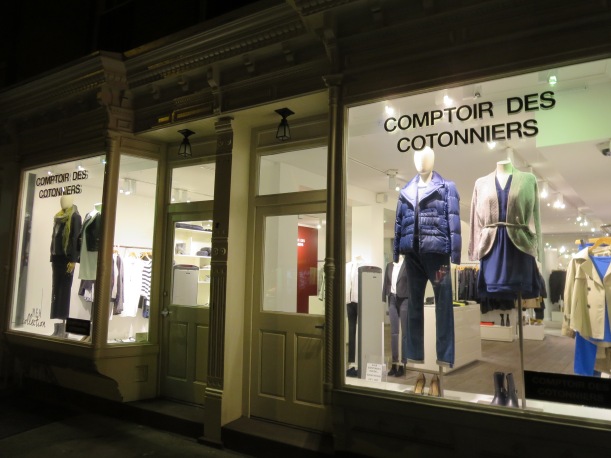 This shop is the result of a combination of two pre-existing retail spaces (notice the structural support running down the middle of the store). If this store falls on hard times, it can shrink into one half of the space leaving another small storefront available for a new tenant.

With the current recovery and reurbanization of the US, there is a lot of construction in old industrial cities and suburbs that are looking to be more dense and walkable. As can be seen in places like Jersey City, the retail component of these buildings often involves larger spaces. This poses a challenge because it sets a higher threshold that a business has to cross before it can afford to rent the space. It is much cheaper to rent 500 square feet than 1000 square feet. There are two problems that result from this. First, there is a smaller pool of businesses that can afford to rent such a place. Typically these are larger more established companies and often are larger chains. Secondly, these larger spaces make it more difficult for a new company to get a foothold in the market. END_OF_DOCUMENT_TOKEN_TO_BE_REPLACED

As I’ve said before, I feel that the prospects for renewed development in downtown Newark are fairly high. This wouldn’t be the first city in New Jersey to go through a period of massive development in recent times. Two PATH Train stops to the East is Jersey City. Here, on land previously dominated by rail yards serving New York City, new towers have been going up. While there are some developments that do very well in terms of creating a pedestrian friendly public realm, the buildings along Christopher Columbus Drive unfortunately do not. If Newark is not careful, developers may repeat these mistakes. Unfortunately many of these mistakes will leave a multi-decade legacy. Newark cannot afford to make such costly mistakes. From my walks around this area, I think there are four lessons that can be learned from these developments. These lessons can be applied in Newark and any other urban area.

Buildings should front directly on to pedestrian space

One Evertrust Plaza does its best to keep people away by being set back from the street and separated by a fence.

One Evertrust Plaza at the corner of Christopher Columbus Drive and Washington Street is a great example of this problem. The 17 story high-rise is separated from the street by large swaths of grass, some parking and what appears to be a 5 foot tall fence. Fortunately this building does not include parking underneath. If that was the case, the pedestrian entrance would be largely ornamental. An entire block in this superbly transit accessible neighborhood is completely devoid of street activities. It is possible to cut this building some slack; it was built in 1986, at a time where the developers can claim they didn’t know any better. Ultimately, the one message that One Evertrust Plaza gets across is, “Stay away!” Fortunately, this appears to be a correctable mistake. The first floor of the high-rise could be converted to pedestrian oriented activities, the fences could be removed and the excess space could be redeveloped. The space between the building and the intersection of Christopher Columbus and Washington could hypothetically become a well activated pedestrian plaza. END_OF_DOCUMENT_TOKEN_TO_BE_REPLACED

On June 14, I participated in a march from Newark City Hall to Newark’s riverfront. This long neglected post-industrial city is making a comeback. Having lost over 150,000 residents (37% of its population) in the last half of the 20th century, Newark gained a national reputation for urban decay and decline. With rising prices in nearby New York City as well as Hoboken and Jersey City, this transit hub is seeing an influx of residents and investment. While there is renewed interest in Newark, there is an industrial legacy that needs to be addressed. END_OF_DOCUMENT_TOKEN_TO_BE_REPLACED